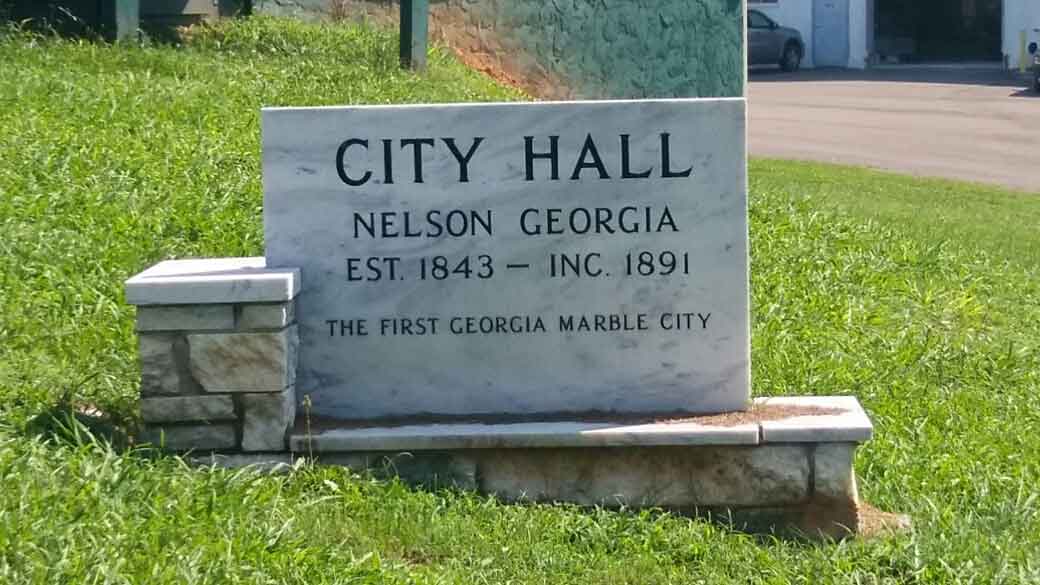 Pickens County was created in 1853 from parts of Cherokee and Gilmer counties. Georgia's 100th county was named for General Andrew Pickens, a Revolutionary War soldier.

The City of Nelson is named after John Nelson, early landowner, farmer, and rifle maker. Nelson is served through it's downtown by the Georgia Northeastern Railroad, and by the former route of state route 5 along its main street. Sould of old 5 lies the city of Ball Ground and north is unincorperated Tate. The north end of I-575 and south end of state route 515 is at the county line just to the southwest of Nelson.

A railroad line built in 1883 from Atlanta through the valleys and mountain passes of Pickens County to Tate and Nelson made possible the development of large marble quaries. One of the largest marble veins in the world is in Pickens County, running at least four miles long. It is a half-mile deep and almost that wide in places. Over 60 percent of the monuments in Washington D.C. are made from Pickens County marble.

The Marble Museum is located in the Nelson City Hall. The museum includes a year-round exhibit of examples of fine marble and shows the history or marble mining in Pickens County. Many stone cutters and other workers who migrated from either Italy or Scotland in the early years of the industry settled in Nelson to work in the area's marble industry. Today the Great Northern Railroad operates between Tate Georgia, and the CSX interchange at Elizabeth (Marietta) five days a week. The Georgia Marble rail lines at Tate and Marble Hill, and the Blue Ridge Scenic Railroad at Blue Ridge, Georgia are also operated by GNRR.


Truly an international city, Nelson was home to approximately 50 Italian families brought to Nelson by the Georgia Marble Company
because of their skilled craftsmanship in marble carving and sculpting.They worked here side by side with other Nelson residents to craft
some of the most widely recognized structures in America, and even around the world today. Some of these include headstones at Arlington National Cemetery, the East front to the U.S. Capital Building, The Lincoln Memorial, the Russian Embassy, The New York Stock Exchange, The Federal Reserve Bank, and St. Peters Cathedral in the Loop Downtown Chicago.